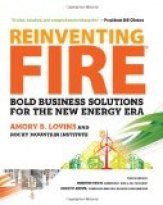 More About This Title Reinventing Fire

Oil and coal have built our civilization, created our wealth, and enriched the lives of billions. Yet their rising costs to our security, economy, health, and environment now outweigh their benefits.

Moreover, that long-awaited energy tipping point—where alternatives work better than oil and coal and compete purely on cost—is no longer decades in the future. It is here and now. And it is the fulcrum of economic transformation.

A global clean energy race has emerged with astounding speed.

The ability to operate without fossil fuels will define winners and losers in business—and among nations.

Now, in Reinventing Fire, Amory Lovins and Rocky Mountain Institute offer a new vision to revitalize business models and win the clean energy race—not forced by public policy but led by business for enduring profit. Grounded in 30 years’ practical experience, this ground-breaking, peer-reviewed analysis integrates market-based
solutions across transportation, buildings, industry, and electricity. It maps pathways and competitive strategies for a 158%-bigger 2050 U.S. economy that needs no oil, no coal, no nuclear energy, one third less natural gas, and no new inventions.

Amory Lovins is among the world’s leading experts on energy and its links with economy, security, development, and environment. He has advised the energy and other industries for four decades, as well as the U.S. departments of energy and defense. His work in more than fifty countries has been recognized by the
“Alternative Nobel,” Zayed, Blue Planet, Volvo, Onassis, Nissan, Shingo, and Mitchell Prizes, the Benjamin Franklin and Happold Medals, MacArthur and Ashoka Fellowships, eleven honorary doctorates, and the Heinz, Lindbergh, Time Hero for the Planet, National Design, and World Technology Awards. An honorary U.S.
architect, Swedish engineering academician, and former Oxford don, he has taught at nine universities. Among his thirty previous books are Small Is Profitable, Winning the Oil Endgame, and the coauthored business classic Natural Capitalism. Lovins was named one of Time’s 100 most influential people in the world and Foreign Policy’s 100 top global thinkers. He is cofounder, chairman, and chief scientist of Rocky Mountain Institute.

"In crisp and vivid language, Amory Lovins sets out a blueprint for a much-improved future in the generation and use of energy. We can all learn from reading this clear statement from a real expert."--George P. Shultz, former Secretary of State and Secretary of the Treasury, distinguished fellow at Stanford University's Hoover Institution, former president of Bechtel


"My friend Amory Lovins knows that the most important question of the twenty-first century is the "how" question-how we turn good ideas into working solutions. Reinventing Fire is a wise, detailed, and comprehensive blueprint for gathering the best existing technologies for energy use and putting them to work right now to create jobs, end our dependence on climate-changing fossil fuels, and unleash the enormous economic potential of the coming energy revolution."--President Bill Clinton


"If you wanted to bring America happiness and prosperity, and address unemployment, government gridlock and climate change, and create meaning in a world rife with contradictory views and ideologies, you can do one thing: read Reinventing Fire...and then see to it that it is read by every decision maker in the land. This is a stunning work of enormous dimension. Reinventing Fire outlines an eminently practical path to a durable and meaningful future by reimagining how we use and produce the lifeblood of civilization-energy in its myriad forms."--Paul Hawken, author of Blessed Unrest; co-author, Natural Capitalism


"Amory Lovins and his team of extraordinary professionals provide an analytically sound, detailed, compelling plan for transforming our national use of energy-and for saving $5 trillion in the process! Reinventing Fire is a towering work, a page-turning tour de force of compelling wisdom that deserves a permanent place on the desk-nay, in the mind-of whoever holds the chair in the Oval Office."--Robert C. McFarlane, national security advisor to President Reagan; co-founder and co-chair of the United States Energy Security Council


"America's business leaders have long waited for a practical vision of how innovation and entrepreneurship can drive the shift from fossil fuels to efficiency and renewables. Now, in Reinventing Fire, that profit-led path is here, clear, and compelling."--Gerald D. Hines, founder and chairman, Hines


"Reinventing Fire crackles with fresh perspectives and compelling insights about our energy past, present, and future. Drawing on the logic of economics, physics, geology, national security, and just plain common sense, Lovins and his colleagues blaze a trail toward an energy future that is cleaner, cheaper, and safer. A 'must read' book for business leaders, policymakers, environmentalists, academics, and anyone else who cares about our planet's future and our nation's prosperity."--Dan Esty, Director, Center for Business and the Environment at Yale University, and author of Green to Gold


"A compelling call for action. From one of the brightest and most practical thinkers in America-straight from the heart, bold advice to America on how to handle energy, reduce the budget deficit, and create millions of jobs. Amory Lovins has written the definitive prescription for the twenty-first century American economy. Take these prescriptions on energy, and the rest of America will do quite nicely in the years ahead. Ignore these recommendations, and we'll find ourselves in a darkening struggle for our prosperity, our future, and our way of life."--Retired General Wesley K. Clark, former NATO Supreme Allied Commander, Europe


"A brilliant, thorough, innovative plan for a complete and profitable restructuring over the next four decades of how we use and supply energy for transport, electricity, buildings, and industry. RMI's new fire will transform everything we do, and will especially help us see our way out of the massive problems caused by our dependence on oil and coal."--R. James Woolsey, venture partner, Lux Capital; former director of Central Intelligence; chairman, Foundation for Defense of Democracies