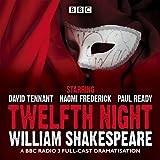 More About This Title Twelfth Night

David Tennant stars as Malvolio in Shakespeare's comedy of disguise, madness, and love. One of Shakespeare's happiest plays, Twelfth Night is both a comedy of misrule and a trenchant attack on puritanism. Disguise and deceit leads to misadventure, madness, and mistaken love. Orsino loves Olivia, but she loves Cesario, who really does love Orsino (for Cesario is actually Viola). But Malvolio believes his mistress, Olivia, loves him, as he is a victim of a trick played on him by those who would make him mad. Naomi Frederick and Paul Ready are Viola and Orsino in his sparkling BBC Radio 3 production.

William Shakespeare and Christopher Marlowe were two of the influential Elizabethan dramatists whose work is now regarded as English Rennaissance theater. Another important name is that of Ben Jonson. These playwrights in particular chronicled the history of English kings and queens, through the ages, and it is their work which was drawn upon by producer Martin Jenkins as the basis of the plays in Vivat Rex.