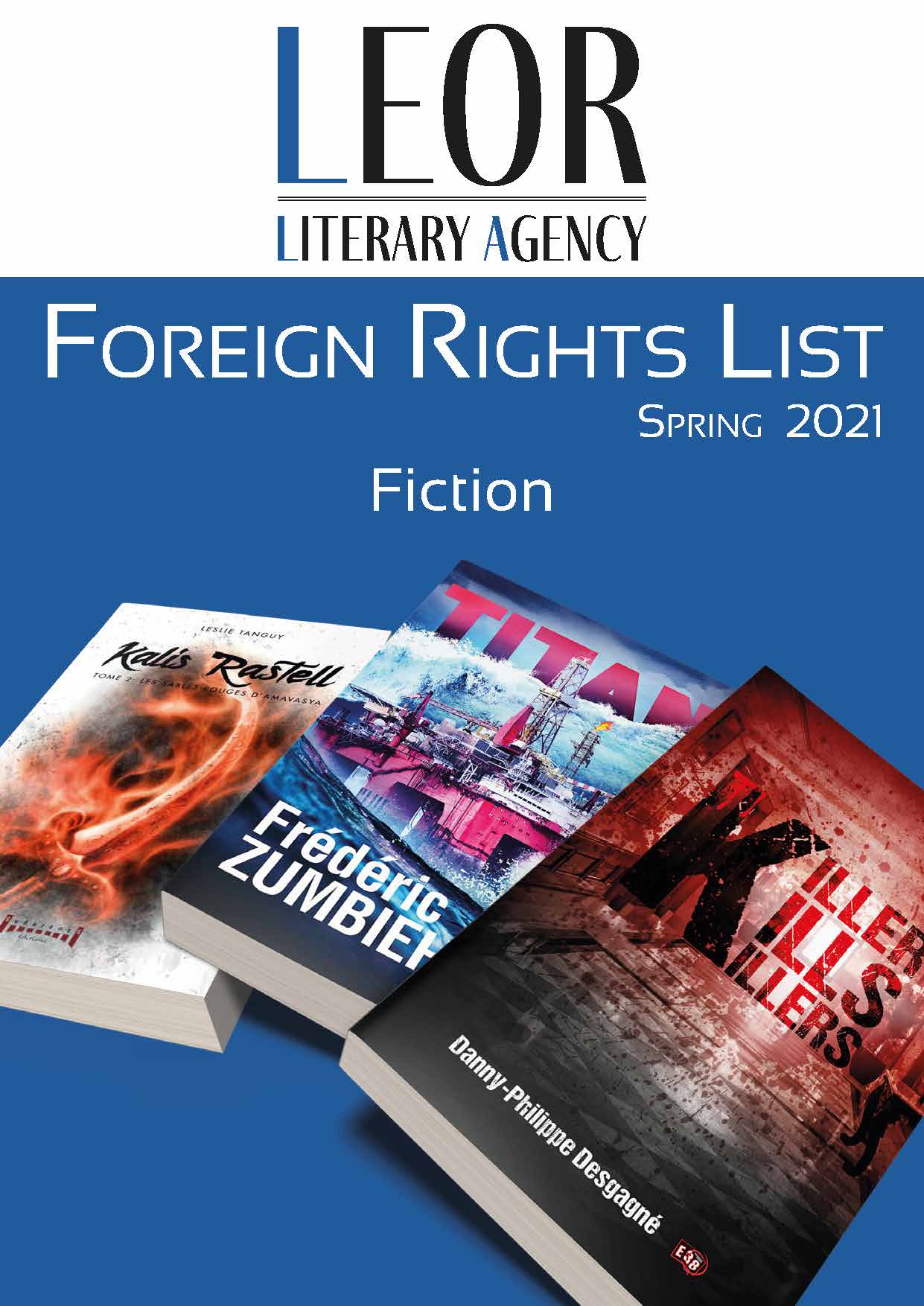 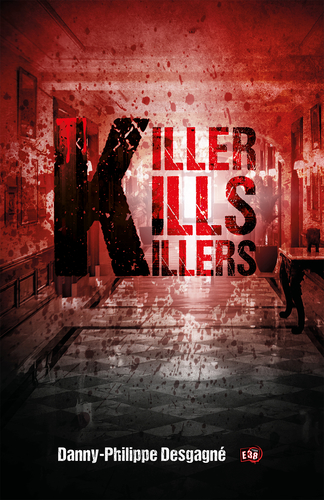 During a serial killers’ congress, participants are killed one after another in the same way they used to kill their victims. A killers’ killer in on the loose. The Work In a North American metropolis, the mutilated body of a man is discovered in the backyard of a local grocery store. Three other murders, each more violent than the last, follow in quick succession. All the victims, only men, are murdered according to operating modes based on staging of an absolute horror. That’s all it takes for the word serial killer to be utt...

Danny-Philippe Desgagné grew up in a mining town in northeastern Quebec, with a detective father and a mother at home. First a letter carrier for 7 years, then a bailiff for a few years, he was tired of working for othersto make a living and started a business with his brothers. Following the death of his scriptwriter brother ten yearsago, he decides to take up and finish the work they had started to write together: Killer kills Killers. Danny-Philippe is also the author of Irimi (éditions Félix), La flamme et l’abîme (éditions Triskel...

A strange man introduced himself to the police station claiming responsibility for the murder of four people. Four names on a list. Four unknown victims. The Work Four names on a list. Four unknown victims. How to identify them and break the silence? Sergeant Maxime Monceau, a specialist in non-verbal speech, has been assigned to investigate a mysterious case that puts the Police Investigation Unit at a dead end. A strange man has turned himself in to the station, accusing himself of murder. The problem is that, apart from a single... 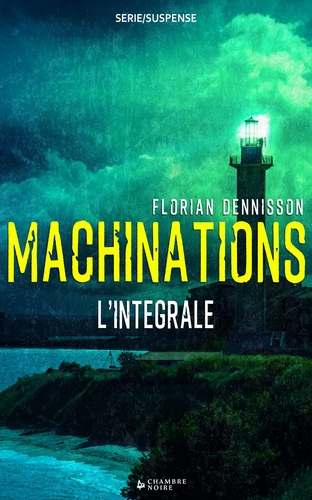 An Amazon bestseller since release. More than 200,000 copies sold.

After a first life made of music bands, tours around the world and studio recordings of albums, Florian Dennisson traded his guitar for a pen. As a passionate reader of Agatha Christie’s novels from a very young age, his favourite genre was the thriller, but generally speaking, he likes to tell any story where suspense plays a major part. Every day, he digs deeper and deeper to imagine endearing characters and unexpected twists!

THE ELEVEN ORPHANS OF MRS. LI 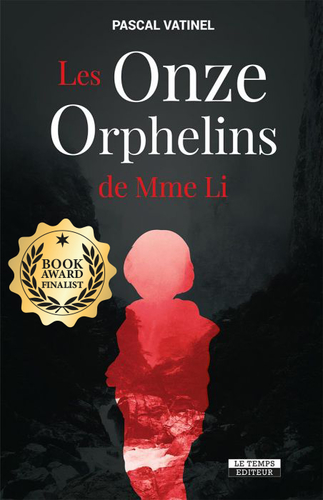 An exotic thriller that give readers a glimpse of the shadowy side of a still mysterious China.

What dark secret hides behind the disappearances of eleven children of an uncommon Chinese orphanage, housing disgraced children casted aside by the society? The Work In charge of protecting a 5-year-old orphan girl wanted by the police, inspector Wen meets Ms. Li, the director of an uncommon orphanage. A place that houses children whose parents have been sentenced to death: disgraced children casted aside by the society. She agrees to hide little Wang Hua and in return, makes the police officer promise to investigate the recent and...

Pascal Vatinel is a renowned China specialist and 2013 winner of the Institut Français’, Prix Stendhal. As well as having published many children’s books for Actes Sud Publishing, he has written several detective novels, published by Rouergue. Repeatedly recognized for the quality of his work, he was the chosen author of the prominent radio station France Inter in 2012 and was selected by the Fnac bookshop in 2013 for his novel Parce que le sang n’oublie pas. He also won the 2012 Dérives de l’Orient prize for L ’A... 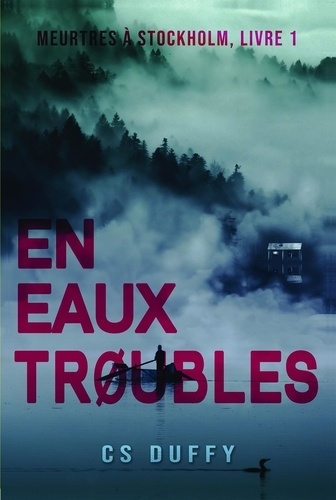 The perfect man. The perfect life. The only problem is the dead body on the beach. Investigative reporter Ellie has just given up her life in London to be with the man of her dreams in Sweden when she stumbles across a half decomposed skeleton on Midsummer’s eve. She’s flung into a murder investigation in a country where she doesn’t speak the language and doesn’t know a soul. Except Johan. The love of her life. Who she is beginning to suspect knows a lot more about the body than he is admitting. Is he the perfect...

C.S. Duffy writes psychological suspense thrillers with a healthy dose of black humour. Her background is in film and TV. She has several projects in development in Sweden and the UK, and her thriller feature Guilty will be shot in April 2018 in Canada. She is the author of Life is Swede, a psychological thriller that was originally written as a blog - leading several readers to contact Swedish news agencies asking them why they hadn’t reported the murder that features in the blog. Claire also runs Hollywoodland, a series of podcasts ab... 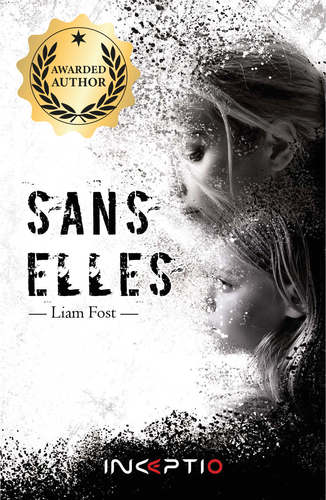 Following the sudden passing of his wife and only daughter in a car accident, Adam seems to be witnessing strange phenomena. But paranormal phenomena or lies surrounding the tragedy? Could they be alive? The Work Faced with the sudden disappearance of his wife, Celia, and only daughter, Eleanor, in a car accident, Adam Weiss’ life is turned upside down. Devastated, he struggles not to let his memories fade away, and sinks into alcohol, abandoning himself completely. By chance, he will meet a woman, Maud, whose daughter Sarah was f...

Liam Frost has always been passionate about reading and quickly discovered the pleasure of writing. He draws his inspiration from various readings ranging from Stephen King to Bret Easton Ellis. He began writing short stories and then published two novels: Volatilisés and Cry for help which won the Fyctia thriller award. 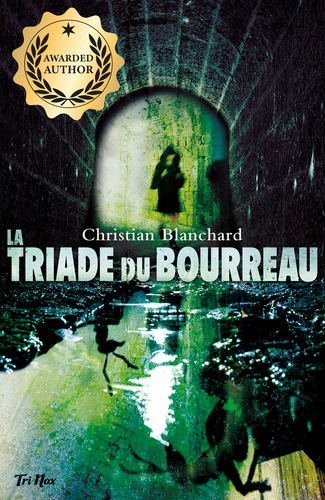 An assassin subjects his victims to a long conditioning, a monstrous experience aimed at shaping their subconscious. The Work 1989. At the request of a police officer, a young archivist carries out researches in newspapers published at the end of the sixties. He has to find press articles on the disappearance of a young woman who was found dead and abandoned in the city’s sewers. The following year, the police officer who had initiated the investigation disappears without a trace. He reappears fourteen years later, haunted, wanderin...

An assassin subjects his victims to a long conditioning, a monstrous experience aimed at shaping their subconscious. The Work 1989. At the request of a police officer, a young archivist carries out researches in newspapers published at the end of the sixties. He has to find press articles on the disappearance of a young woman who was found dead and abandoned in the city’s sewers. The following year, the police officer who had initiated the investigation disappears without a trace. He reappears fourteen years later, haunted,...

TO THE POINT OF MADNESS 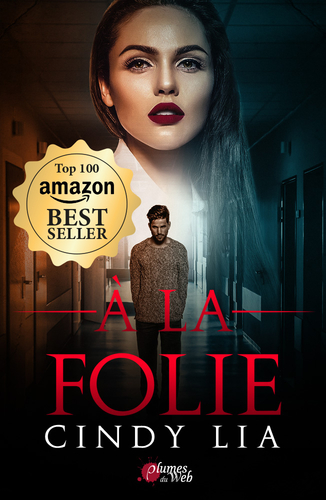 In a psychiatric hospital, a nurse finds herself at the heart a series of unsolved murder in which she seems to be mysteriously linked. The Work As a nurse, recently qualified in psychiatry, Alicia joins the team at Center Hospital, an old institution in the heart of New York whose legends come before its reputation. The building itself holds its share of mysteries, including secrets and inexplicable phenomena. Starting with Julian, a patient with a fiery temperament who, though barely arrived, is already giving the medical teams the...

Cindy Lia lives in the Paris area. Since her childhood, she has dreamt of travelling, of wide open spaces and different landscapes and cultures. Although she has not been there yet, the United States is an inexhaustible source of inspiration. She enjoys writing roles for strong, independent heroines... And mysterious men who chase after them. 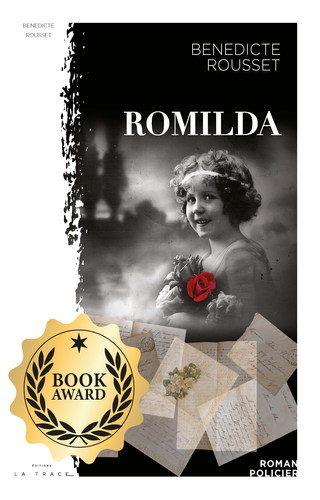 A winner of the 2019 Leclerc Obscur prize for novel writing.

In the summer of 1912 little Rosa, 7 years old, disappears. But in her Corsican family, there is an extra chromosome, the V of revenge. However long it takes, honour will be upheld. The Work It was a feast day in Piolenc, a small town in the south of France, in the summer of 1912. The Barloti family had come from Corsica for a wedding. It was a day of drama too, for little Rosa, 7 years old, was to disappear in an shadowy mystery, leaving only her pretty pink dress to be found a few meters from the house, stained with blood. In this ...

Benedicte Rosset grew up in the Vaucluse in south-eastern France where her father ran a small printing company and her mother was a schoolteacher. As a teacher of language and literature, writing has allowed her to explore hitherto unknown dimensions of herself and further a family tradition she is still discovering. 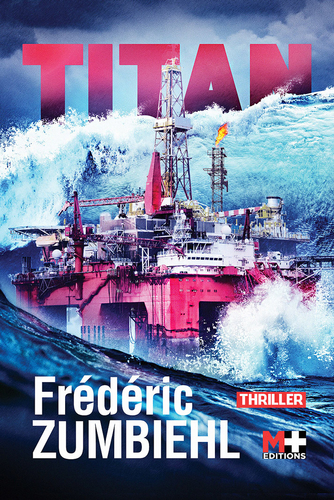 Ellen is invited to contribute to a world-class scientific and parapsychological experiment on Titan. But by the time she realizes she is trapped in a plot to build a climate weapon, it is already too late. The Work After the Cold War, the American army wants to increase its hold over the world by creating a geostrategic weapon of unprecedented force, thanks to the power of the weather. To do so, it creates a huge, revolutionary oil platform called Titan. For her part, Ellen is a world-renowned parapsychologist. Hellman, Ellen’s ...

After a career as a fighter pilot and as a professional aerial advertising pilot, Frédéric Zumbiehl turned to writing comic albums and novels, particularly detective stories and thrillers. He is the author of, among many others, Buck Danny (Dupuis Publishing) and the Tanguy et Laverdure series (Dargaud Publishing). 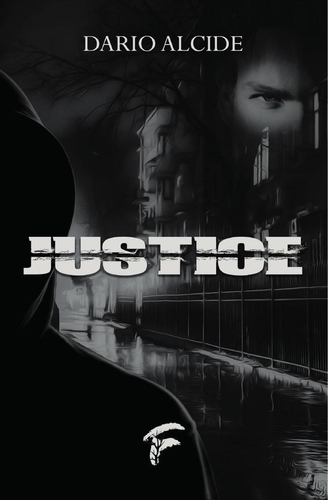 In another life, Dario Alcide was a programmer and then a marketing manager. But this writer-born man quickly decided to devote himself to his passion for writing. In 2009, he published his first self-published novel, Farence: The Legend. It was followed by Farence: Le choix de Mira, Pentacle... Success came very quickly and in 2017, Dario Alcide left the corporate world after having published his first novel the previous year through a publishing house (Kereban, 404 Publishing). He now devotes himself to writing full time. As an author,... 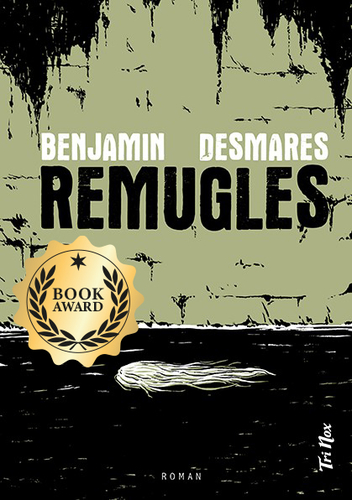 Well-kept secrets, stubborn hatreds, the settling of accounts and jealousies, all the filthy mess that has accumulated over the years seems to want to rise to the surface. The Work Nicolas Beaucel, a city policeman, thought he would find peace and a quiet job in a rural area in the west of France, to escape his past. But strange things happen: red-haired animals disappear, a sleepwalker wakes up in unlikely places and witnesses worrying events, the water treatment station is regularly clogged up... Then things get out of hand: two te...

Originally from Cherbourg, Benjamin Desmares has lived near Redon in Brittany for many years. He has worked for several years, in performance arts for an organization that promotes social integration. He is the author of several novels for teenagers and adults, published since 2015 by Editions du Rouergue. They include Des poings dans le ventre, which received the "Pépite" prize in the novel category at the Montreuil Youth Book Fair in 2017, and the post-apocalyptic, La Tribu des Désormais (2019). 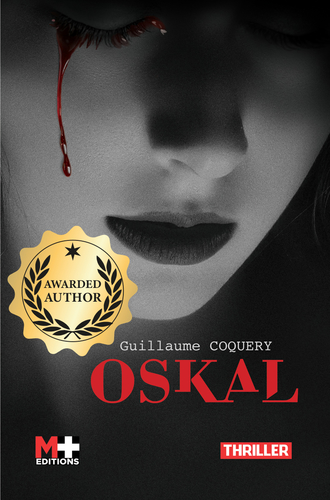 Strange murders in Besançon and Toulouse are carefully hushed up. Captain Damien Sergent and his team lead the investigation to unmask the influential murderers. The Work Oskal is the first work in a trilogy about a murder case. Powerful forces combine to oppose the investigators. In summer 2010, in Besançon, a female jogger disappears. At the scene, the DNA of a member of the Prefect’s family is found but shortly afterwards the DNA file is erased and the case is buried. In 2018, near Toulouse, Captain Damien Sergent takes his son...

Guillaume Coquery is a technician and machine designer from Saint-Gaudens in South-Western France. With Oksal, the first work in a trilogy, he has won several prizes in short story competitions. 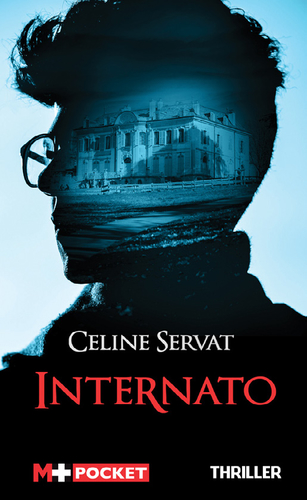 Gustave and Gabriela are prisoners of a boarding school worthy of history’s darkest periods. Will they come out of this nightmare unscathed? The Work Gustave is a 17-year-old boy living alone with his father. The latter decides to send him to the same boarding school he attended at his age. The young man is then sent to Buenos Aires for a language trip, cut off from the outside world. Although usually a loner, he meets new friends, Augusto, Heinrich and Gunther, but something is not right. The young man quickly falls apart, and the...

Céline Servat is a social worker but has always loved writing. Her work is notable for its captivating short stories, several of which have won awards.