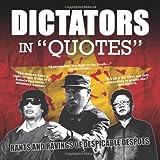 More About This Title Dictators in "Quotes"

A collection of ridiculous rhetoric and absurdisms uttered by famous dictators

"It's all a lie. They are just pretending to praise me."  —Kim Jong-Il

"The women have a right to vote if she is a femail or a male."  —Muammar Gaddafi

Millions of people in dozens of countries across the globe live under the autocratic rule of a dictator whose utterances, edicts, excesses, and actions are both chilling and ludicrous in equal measure. These rulers, who typically subjugated a population by force, are the worst egotists, the vilest perpetrators of crimes against humanity, and the most vilified by the people lucky enough to live in the free and democratic world. With the aid of more than 150 photographs, this book exposes—by example of their own words—the rhetoric, dictums, and double standards of more than 65 dictators from around the world, and reveals a fascinating insight into the minds of these despicable despots.

Ammonite Press is a unique independent publisher of high-quality, picture-led books. PA Photos is the photography arm of the PA Group, which also owns the The Press Association, the UK’s national news agency. Established in the late 19th century, the PA has been capturing editorial photography for 140 years.