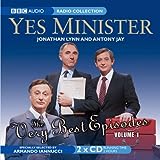 Armando Iannucci, Yes Minister's celebrity advocate on the BBC's search for Britain's Best Sitcom, has chosen his four favorite episodes, "quite simply because they make me laugh the most." Here is some of the funniest sitcom material ever written—a lasting legacy for two of our greatest actors: Paul Eddington and Nigel Hawthorne. Guest stars include Brenda Blethyn, Ian Lavender, Anton Rodgers, and Graeme Garden. "The Greasy Pole" sees James Hacker learning the difficulty of keeping one's hands clean while climbing the greasy pole. Toxic waste is such a tricky business. . . In "The Skeleton in the Cupboard," the government will lose £40 million due to a mistake someone made 30 years ago. Who could have made such a howler? "The Whisky Priest" finds Hacker struggling not to do right when it's so obviously wrong after he hears that British arms are being sold abroad. Meanwhile, Bernard strives to become a moral vacuum. And in "The Death List," when Hacker's name turns up on a "death list," a second honeymoon for him and his wife soon includes some unwelcome guests from Special Branch.