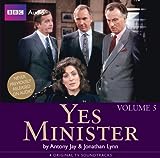 More About This Title Yes Minister

Jim Hacker and Sir Humphrey lock horns again in these four hilarious episodes. In "The Official Visit," Jim Hacker welcomes the new leader of an African country, even though the visit may mean Hacker has to leave politics. . . In "Equal Opportunities," Sir Humphrey doesn’t see eye to eye with Jim’s plan for sexual equality. "The Challenge" finds Hacker on a mission to make local authorities responsible for their spending, which includes nuclear fallout shelters. And in "The Bed of Nails," when Jim is asked to formulate an Integrated Transport Policy, he becomes "Transport Supremo." But is it a title worth having? These episodes of machinations and manipulation also feature Ludovic Kennedy, Eleanor Bron, Ian Lavender, and Tenniel Evans.