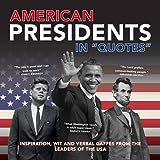 More About This Title American Presidents in "Quotes"

"The nine most terrifying words in the English language are, 'I'm from the government and I'm here to help.'"  —Ronald Reagan

"Fighting battles is like courting girls: those who make the most pretensions and are boldest usually win."  —Rutherford B. Hayes

The President of the United States of America is the most powerful person in the world, the leader of the world's foremost economic and military power with global interests and an unparalleled global reach. The nation's GDP is close to a quarter of the world's total and its military budget is almost as great as the rest of the world's military expenditure put together. So when U.S. Presidents speak people listen. Since George Washington became the first President of the United States in 1789, 42 men have occupied that powerful position, some more memorably than others. Many have been great orators, whose words have given hope and inspiration to the American people, and even the world, during difficult times; some have had very little of note to say and some have sought to deceive; while others at times have managed to put their feet firmly in their mouths. Illustrated with photographs throughout, this book is a celebration of the political rhetoric, wisdom, humor, and gaffes that have been spoken and written by those 43 Presidents of the United States.

Ammonite Press is a unique indepedent publisher of high-quality, picture-led books. PA Photos is the photography arm of the PA Group, which also owns the The Press Association, the UK’s national news agency. Established in the late 19th Century, the PA has been capturing editorial photography for 140 years.