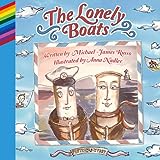 More About This Title The Lonely Boats

In The Lonely Boats, a young boy named Michael recalls happy summers visiting his Grandma Rose in Hattie’s Harbor with his family. One particular summer, he sees two boats in the inlet and asks his dad if they are lonely. Michael’s dad explains to him that the boats are not lonely but simply waiting to go to the sea. He tells the story of a boat-builder named Garth who built two boats from felled oak trees and named them Kitty and Lou. Kitty and Lou were good friends who liked to talk and share stories. When a hurricane threatens the villagers, Kitty and Lou spring into action carrying the villagers to safety. When they lose track of each other while rescuing the town, Garth helps Lou find Kitty. The boats are reunited and the townspeople praise the two boats for saving everyone. The Lonely Boats teaches children the importance of friendship, teamwork and loyalty and is published under RainbowKidz, an imprint created to promote self-esteem in children that are gay or part of an LGBTQ family.

Michael-james Russo is a proud native New Yorker who is currently living in Long Island, New York. In addition to writing, Michael-james has been in the home furnishings industry as an interior decorator for more than 25 years. Anna Nadler specializes in children's book illustration, editorial illustration, fashion illustration, and other artistic projects. Anna lives in Staten Island, NY.