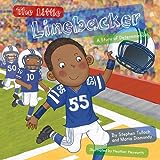 More About This Title The Little Linebacker

Stephen is a little kid with big dreams of playing football. The odds are against him when he is tested and faced with challenges. This is a story of a boy who worked hard to defy the odds and become a leader.

Stephen Tulloch is the starting Middle Linebacker for the Detroit Lions. He launched the Stephen Tulloch Foundation in 2009 and has helped thousands of people through his community outreach and generous giving. Tulloch was named as one of the top 100 players in the NFL in 2012 & 2013, has been selected as a team captain of the Detroit lions by his teammates and has been awarded multiple awards nationally and locally for his efforts off the field including the Walter Payton Man of the Year Award, The Robert Porche Man of the Year Award, the Grid Iron Great Award along with the NFLPA PULSE award and being a finalist for the Byron “Whizzer” White Award which recognizes the top foundations in the NFL. Stephen was born and raised in Miami where he still resides in the off season.
Maria Dismondy is an award-winning author, specializing in books about challenges children face. As a sought-after speaker, Maria spreads her message by presenting at schools and conferences across the country. Maria lives in southeastern Michigan.
Heather Heyworth lives and works in a sleepy Suffolk market town in the UK. She has illustrated many books including picture, board and educational books.