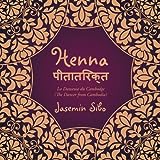 More About This Title Henna : La Danseuse du Cambodge (The Dancer from Cambodia)

In a series of narrative poems, Henna पीतातिरक्त: La Danseuse du Cambodge (The Dancer from Cambodia) travels back in time to the Golden Indochine era in the year 800 and goes forward to the mid-1970s during a time of upheaval in Southeast Asia.

In ancient times, various kingdoms ruled the countries we now call Cambodia, Thailand, Laos, Vietnam, Myanmar, and Peninsular Malaysia. Gigantic elephants served mighty kings, and mythical celestial nymphs danced for gods. Dancers called Apsaras were believed to be part human and part angel, possessing exquisite beauty and grace. They served as the Royal Cambodian ballerinas and had the ability to change forms at will.

One such dancer named Henna is thought to be a goddess reincarnated. As she grows into a beautiful young lady, she faces many challenges and threats that force her to choose between good and evil. Then, as she lives on through the centuries, she sees the change that occurs in her beloved Cambodia—including the coming of the Khmer Rouge in 1975, when nearly all the country’s artists were wiped out.

These narrative poems present a story of the human spirit, exploring Cambodian history, celebrating the ancient performing arts, and overcoming evil with love and grace.

Jasemin Sibo is an Indochine Chinese native. Born in the picturesque valley of Ipoh, Malaysia, she grew up in the midst of lush tropical rainforests and near the azure Malacca Strait. She is an author, acrylic painter, performing artisan, and TV talent in Southeast Asia.

An Ode to Dancers

Golden Era of Angkor
The Mahabharata

Jewels of the Palace