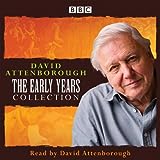 More About This Title David Attenborough: The Early Years

Three of David Attenborough's early adventures are collected here, along with a fascinating collection of archive interviews with the broadcaster and naturalist. David Attenborough's books and broadcasts have opened up the incredible world of natural history to millions of viewers and listeners. Zoo Quest for a Dragon takes us back to one of his earliest projects when the BBC and London Zoo joined forces on several animal-collecting expeditions. Quest in Paradise follows his next animal collecting and filming trip to New Guinea, home of the exotic Birds of Paradise. Quest Under Capricorn details Attenborough’s expedition to Australia in 1963 in search of more rare species. There he meets Aborigines, goes on a walkabout in the bush, and learns the secret craft of the artists of Arnhem Land. Specially recorded for audio, David Attenborough's earliest adventures are sometimes life-threatening, often hilarious, and always totally absorbing. Also included is David Attenborough In His Own Words, a collection of interviews taken from the BBC radio and TV archives.

Sir David Attenborough is Britain's best-known natural history film-maker. His career as a naturalist and broadcaster has spanned nearly six decades and includes several landmark BBC series, including Life on Earth (1979), The Living Planet (1984), The Trials of Life (1990), The Private Life of Plants (1995), Life of Birds (1998), The Blue Planet (2001), Life of Mammals (2002), Planet Earth (2006), and Life in Cold Blood (2008). Sir David was knighted in 1985, is an Honorary Fellow of Clare College, Cambridge, and a Fellow of the Royal Society, and stands at the forefront of issues concerning the planet's declining species and conservation.