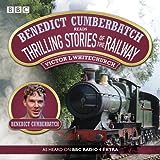 Benedict Cumberbatch reads five stories featuring the famous vegetarian railway detective, Thorpe Hazell, as heard on BBC Radio 4. In The Affair of the German Dispatch-Box, Hazell hatches a daring plan to retrieve a highly sensitive government document before it reaches the German Ambassador. In Sir Gilbert Murrell's Picture, when an entire wagon containing valuable paintings disappears from a goods train, Hazell's skill is needed. In The Affair of the Corridor Express, a multimillionaire's son disappears from a moving train. Hazell must find the kidnappers before the boy is lost forever. In The Stolen Necklace, a lady begs Hazell to help when the diamond necklace that she borrowed is stolen from her suitcase. In The Affair of the Birmingham Bank, customers keep drawing money from a Midlands bank, so gold reserves are sent by train. Hazell must guard against train robbery.

Victor L. Whitechurch was a British author born in 1868. He became first a curate and then, in 1904, vicar of St Michael’s church in Blewbury, Berkshire. In his later career he was Chaplain to the Bishop of Oxford and, from 1918, Rural Dean of Aylesbury. His first novel, The Course of Justice, was published in 1903, and a prolific writing career followed. Whitechurch’s detective Thorpe Hazell was a vegetarian railway detective, written as an antidote to Sherlock Holmes. Stories featuring Hazell were featured in Strand Magazine, Railway Magazine and Pearson’s and Harmsworth’s magazines.