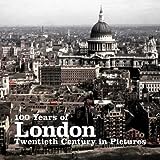 More About This Title 100 Years of London

A visual record of Britain’s capital city through a century in which much changed, and much remained the same

With 300 photographs from one of Britain's prestigious news archives, this book captures London's transformation over the past 100 years. Each image has been scanned especially for this book, many from glass plates, ensuring the best possible quality of reproduction. One of the world’s great capitals, London is an icon for both the British people and visitors alike. A financial center, official home to the Royal Family, site of important sporting venues, a hub of entertainment and the arts, the city’s facets are many. This book shows London at its best and worst through the 20th century, a century in which it has experienced events of immense significance from the Blitz to the Millennium.

Ammonite Press is a unique independent publisher of high-quality, picture-led books. PA Photos is the photographic agency of the PA Group, the UK’s national press agency best known as The Press Association. Established in the 19th century, the PA has been capturing and archiving news photography for 140 years.