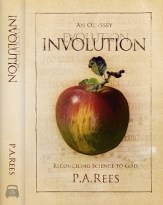 More About This Title Involution- An Odyssey

Involution- An Odyssey Reconciling Science to God. This book has been called '...a brilliant and profoundly erudite epic...a heroic intellectual tour de force...' (by David Lorimer, the Director of the Scientific and Medical Network) and both 'brave...and totally insightful (by Ervin Laszlo) but the book defies description; it breaks all the rules and is unlike any other. It is so comprehensive in its sweep, original in its writing, and its synthesis, that to isolate any aspect is to misrepresent all the others. Two companions, Reason and Soul, invite the reader to accompany them on a light-hearted poetic journey through the chronology of Western thought to uncover a bold hypothesis: that the evolution of science has been shaped by its gradual and accelerating recovery of memory (involution). That recovery has been led by the inspired maverick genius, moving backwards through time (usually called the past), but which has provided science's future at every moment of new creative thought. Scientific inspiration and its chronology mirrors evolution. This incremental excavation and transfer of memory to intellect implies the pre-human encoding (involution) of consciousness in the structure of matter, and the interconnected consciousness of all life. DNA is the likely encoding and mediating molecule, or resonant coherence of this information, through both time and space. The sweep of history is needed to expose this proposal and its evidence: It requires all the disciplines of science, all the epochs of thought: which only a poetic economy 'woven together with extraordinary subtlety' (Lorimer) could convey. Yet, paradoxically, through involution the collective journey has been lit by individuals, unique in their subjective contributions to the discipline that claims only 'objective' validated truth. The same pattern is mirrored in the congruent history of painting and musical composition. Genius differs only in the languages of expression. This book loosely weaves them all, using familiar material to arrive at an art, a science and divinity behind science. In nine swift Cantos the work travels through pre-human involution, the enfolding of consciousness in matter, and then early man's emergence on the Serengeti. Through the recorded civilizations of Greece, Rome, the Dark Ages, the Renaissance, into the Enlightenment and finally Modernism the success of science progressively obscures the internal story, the story of direct intuition, nous, experience, and the complement to Darwin that this collective involution provides. But there is more to it than merely science; for science is a language through which to follow a deeper journey, Mankind's collective journey inwards, to the nature of himself: which is why the scientific signposts are confined to end-notes to leave the poetic journey unencumbered. They take no scientific knowledge for granted: they are not essential to the poetic narrative but instead caulk the ship from which we view an alternative journey. By adding involution to evolution, mind and matter become two sides of a single coin, only perceived as distinct through the intellect's division from its deeper self, from consciousness, experience, and understanding. The co-creation of God and the universe is what this book restores and is about. It has been called a 'heroic tour de force, a brilliant and erudite epic...' but also 'clearly written and easy to read' It slaughters a few sacred cows, 'brave and a lot of fun.

Praise for 'Involution- An Odyssey Reconciling Science to God'

‘A brilliant and profoundly erudite epic charting the evolution of Western thinking processes, probing the frontiers of rationality and naturalism and opening up a deeper understanding of the nature of reality based on the reality of mystical experience. The author’s grasp of the principal elements of Western culture is masterly and her poetic narrative woven together with extraordinary subtlety. The detailed footnotes demonstrate a rare depth of perceptive scholarship. This is nothing short of a heroic intellectual tour de force and deserves the widest readership.’ (David Lorimer, Director Scientific and Medical Network)

The scale of the feat you have thereby achieved by writing in poetry is immense. This goes far beyond the mechanistic notions of wholeness arrived at by some modern scientific authors. Your work reintroduces the aesthetic, beautiful, meaningful process that is poetry into science. The genius of involution is not just a mechanism of science relating to the whole but a completely different realisation of the beautiful, within living process.'

*
"Involution is, at least in terms of 'subject', a daring, Dantean feat.

Rees's profound notion that the evolution of humankind is made possible by the dormant dominions of evolutionary memory in our unconscious - the eponymous 'involution' - is, I would suspect, a theory Charles Darwin would have gratefully embraced as a curative to his own bleaker 'discoveries', which he initially emotionally and religiously resisted.

That Rees has chosen to communicate her dialectic in the medium of sprung-rhymed blank verse is ingenious in itself, as well as being in the narrative spirit of the poetry of the ancients.

Whatever one's poetic, religious or scientific response to Involution may be, what will be difficult for even the most scouring of critics to deny is it's scholastic vitality, compositional discipline and macrocosmic scope. Involution is a work of indisputably tall ambition, and an accomplishment which may well prove much more than the sum of its invariably exceptional parts".