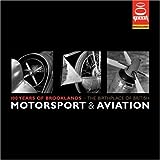 More About This Title 100 Years of Brooklands

Conceived and designed by Peter Campbell working in conjunction with top advertising photographer Ron Bambridge and the Brooklands Museum, this profusely illustrated book celebrates the centenary of the world's first custom-built motor racing circuit and home of British aviation. In the pioneering days of driving, competitive racing was banned on public roads in the United Kingdom. British automobile manufacturers could only watch as their European counterparts such as Fiat, Renault, and Peugeot gained valuable publicity from city-to-city races held around the continent, despite the inherent dangers. To create a base for UK motor sport, Hugh Fortescue Locke-King designed a circuit where cars could race in comparative safety. In 1906 he set to work to build a huge concrete banked oval bowl, 100 feet wide and more than two miles long, on land he owned in Surrey. This formidable engineering project was completed within 18 months and in 1907, Brooklands held its first race. It remained in constant use until 1939 and the cars and drivers who competed there have passed into legend. Huge, powerful cars from companies such as Duesenberg, Railton, Lorraine-Dietrich, and Bentley, and smaller cars from MG and Morgan, all took part in long distance races and record breaking. Pioneer drivers such as Malcolm Campbell, Raymond Mays, and J. G. Parry-Thomas competed against fearless lady racers like Doreen Evans and Kay Petrie. It was John Cobb at the wheel of his mighty Napier Railton that established the ultimate circuit record of 143.33mph. The reputation of many motorcycle companies like Norton, Ariel, Zenith, and Douglas were established due to their exploits at Brooklands. Within the grounds of the concrete circuit, hangars were built alongside a small runway. From these buildings pioneer aviators Alliott Verdon-Roe, Tommy Sopwith, and Harry Hawker founded the British aviation industry. It became the home of the Vickers aircraft company and during WWII, numerous aircraft such as the Wellington bomber were built at Brooklands and Barnes Wallis designed his infamous "bouncing bomb." In later years, the circuit fell into disrepair but the production of aircraft continued, from the launch of the first passenger services to the design and creation of much of the first supersonic aircraft, Concorde. The award-winning photographs in this book record the design and engineering details of many of the cars, bikes, and aircraft that now form part of the famous Brooklands Museum, from the very earliest examples to more recent Formula 1 cars that form part of the collection. Shot in black and white, these images evoke a memory of a unique period in the history of automobile and aircraft development, and the unique race circuit that created its own niche in history.