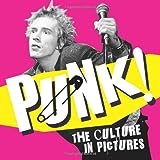 More About This Title Punk!

Punk rock developed in the UK, the United States, and Australia during the mid-1970s as a grass-roots reaction to the perceived excesses of mainstream 1970s rock. By late 1976, bands such as the Ramones, the Sex Pistols, and  The Clash were recognized as the vanguard of a new musical movement. An associated punk subculture emerged, expressing youthful rebellion and characterized by distinctive styles of clothing and adornment, including brightly colored Mohican hairstyles, spiked leather jackets, chokers, and ripped T-shirts, and a variety of anti-authoritarian ideologies. 500 images illustrate the world of punk rock, capturing the atmosphere of gigs and venues, at festivals, and in the recording studio. News pictures expose the hard-living, anarchic lifestyle of punk musicians and their transition into more acceptable members of society; the fashions and colorful hairstyles of punks, and the conflicts with other cultural groups such as Teddy boys and soccer hooligans.