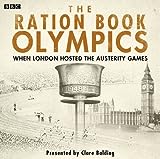 More About This Title The Ration Book Olympics

The 1948 Olympics were very different from the impressive spectacle that London put on in 2012. Three years after the end of World War II, Britain was still gripped by austerity. Rationing was still in force, severe bomb damage was still much in evidence, and no new sports facilities could be built. Visiting athletes were put up in schools and RAF camps. Yet the Games were a resounding success and actually made a profit. Clare Balding meets athletes who competed in 1948, including cyclist Tommy Godwin, who won two bronze medals, and Dorothy Manley, who won silver in the athletics. She also talks to Roger Bannister, who saved the day for the British team in the opening ceremony. The program also includes fascinating voices from the archives, including Dutch sprinter Fanny Blankers-Koen, who won four gold medals.

Clare Balding is an award-winning presenter, writer, and broadcaster who has been presenting sports on television since 1998, when she became synonymous with horse racing on the BBC. Since then, she has reported on five Olympic Games as well as four Paralympic Games and three Winter Olympics. In addition, she is well known for her rugby league coverage; has presented Crufts; and hosts BBC Radio 4's walking series Ramblings. She has also covered ceremonial events such as the Lord Mayor's Show, Trooping the Color, and the Queen's Diamond Jubilee. Her autobiography, My Animals and Other Family, won the National Book Award for biography of the year. The same year, she won the BAFTA Special Award and RTS Presenter of the Year Award for her coverage of the London 2012 Olympic and Paralympic Games. In 2013, she was awarded an OBE for services to broadcasting and journalism in the Queen's Birthday Honors List.