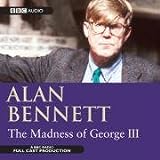 More About This Title The Madness Of George III

Oscar-winning actor Jim Broadbent stars as "mad" King George III in the title role of this adaptation of Alan Bennett’s award-winning play, which co-stars Cheryl Campbell, Nicholas Farrell, and Alun Armstrong. The King is losing his mind. Doctors are brought in as his eccentric behavior becomes more bizarre and erratic, while his son, the Prince Regent, waits—and plots. Combining Jim Broadbent’s "heartbreaking portrayal of the batty old monarch" (Observer) with Alan Bennett’s trademark dark humor, this full-cast drama was first heard on the BBC’s World Service. The Madness of George III was filmed as the Oscar-winning The Madness of King George, starring Nigel Hawthorne and Helen Mirren.

Alan Bennett's television series Talking Heads has become a modern-day classic, as have many of his works for the stage, including Forty Years On, The Lady in the Van, The Madness of George III (together with the Oscar-nominated screenplay The Madness of King George), and an adaptation of The Wind in the Willows. The History Boys won the Evening Standard and Critics' Circle awards for Best Play, The Laurence Olivier Award for Best New Play, and the South Bank Award.