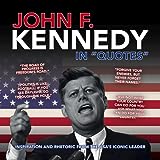 More About This Title John F. Kennedy in "Quotes"

A compendium of inspirational, witty, and humorous quotes from the 35th President of the United States

"The best road to progress is freedom's road.'"

"If we are strong, our strength will speak for itself. If we are weak, words will be of no help."

John F. Kennedy served as president of the United States 1961 until his death in 1963. More than 50 years after his death, many of Kennedy's speeches are considered iconic, notably his inaugural address, which contained the memorable injunction "Ask not what your country can do for you—ask what you can do for your country." He was known as a skilled orator and a passionate economic and social reformer. Illustrated with more than 100 photographs, this book is a celebration of the political rhetoric, wisdom, and humor that were spoken and written by one of the most powerful men in the world.

Ammonite Press is a unique independent publisher of high-quality, picture-led books. PA Photos is the photography arm of the PA Group, which also owns the the Press Association, the UK’s national news agency. Established in the late 19th century, the PA has been capturing editorial photography for 140 years.