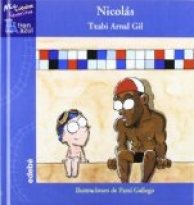 The first time our heroine sets eyes on Nicolás, a tall muscular boy, black as ebony, at the local swimming pool, she imagines he's a real life hero. She's sure he's a swimming champ. But in the water he seems insecure, splashing about instead of swimming. He doesn't seem like the great swimmer she imagined! It's not until later, when Nicolás tells her about his life as a refugee from Sudan, and how the threat of being deported on his 18th birthday is the real reason he wants to learn to swim, that she realizes that he's not just a hero but a real Superhero. A superhero that doesn't want to drown on his inevitable return across the ocean.

A moving but upsettingly common story, that the writer here treats with subtlety, a touch of humor and an overwhelming respect, so that the youngest readers can understand reality whilst avoiding sensationalism.