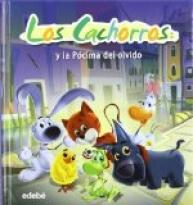 Los Cachorros (The Pet Pals), the famous film characters on paper at last! The delightful adventures with thousands of followers in many countries (the series is being shown in 36 countries and the film, in 23) will delight the younger readers. The tales, whose plots are not linked to each other, present an enigma that can be solved using the values represented by the characters: companionship, intelligence kindness.

In this first book, the wicked Crow Witch steals the Book of Spells and is in possession of the potion of Oblivion, which shhe doesn't think twice about applying to the water of the canals and make the Pet Pals forget who they are. But not all of them come under the spell and the ones whose memory is preserved help their companions by going to the Oracle of the Ancestors, where they find out how to get their spellbound friends back.

However, the wicked Crow Witch gets up to more of her old tricks in the following books!