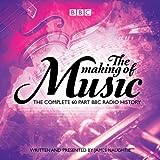 More About This Title The Making of Music

In this major BBC Radio 4 series, James Naughtie uncovers the roots of our music and reveals the soundtrack to our own history.

The history of classical music is inextricably linked with the places it was written, its purpose and its patrons, as well as with politics, war and social change. From the earliest music of the monasteries, to the court and church music of the Renaissance and Reformation and beyond, composers have always changed with the times.

In these programmers, James Naughtie reveals how the chance happenings of history built a classical tradition that tells a glittering and inspiring story. His journey takes him from early beginnings to the present day, where he examines the current state of classical music.

This epic and important series features extracts from the music itself, as well as the voices of Benedict Cumberbatch, Alison Carney, Laurence Fox and Simon Russell Beale alongside James Naughtie’s own.

James Naughtie is one of the BBC's best-known journalists and broadcasters. As well as his work in news journalism, including presenting The World at One and Today, he has introduced music programmers on BBC radio and television for many years. He also presents Radio 4's monthly Bookclub and a variety of live events, including election specials at home and from the United States. His journalistic career began in Aberdeen, in his native North-east Scotland, and he was chief political correspondent of The Scotsman and The Guardian before joining the BBC in 1988. He was Laurence M. Stern Fellow on The Washington Post as well as Sony Radio Personality of the Year. Among his books are The Making of Music and two acclaimed accounts of the Blair years, The Rivals and The Accidental American.