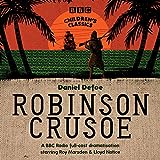 More About This Title Robinson Crusoe

Young Robinson Crusoe has a burning ambition to be a sailor. Paying no attention to his parents’ warnings, he runs away to sea to embark on a series of thrilling adventures: struggles with Barbary pirates, a shipwreck, and the extraordinary meeting with Man Friday. . . Roy Marsden plays the older Robinson Crusoe looking back on a life of recklessness, daring, and adventure—and the survival of 28 years, two months, and 19 days on a desert island. Based on the real-life adventures of Alexander Selkirk, Robinson Crusoe was one of the very first adventure stories to be published in English literature. It remains as gripping today as it did on first publication in 1719, and this enthralling dramatization perfectly evokes the excitement and adventure of the original book.

Daniel Defoe was born in London in 1660. He worked briefly as a hosiery merchant, then as an intelligence agent and political writer. His writings resulted in his imprisonment on several occasions, and earned him powerful friends and enemies. During his lifetime Defoe wrote more than 250 books, pamphlets, and journals, and traveled widely in both Europe and the British Isles. Among his most famous works are Moll Flanders and A Journal of the Plague Year. Though Defoe was nearly 60 before he began writing fiction, his work is so fundamental to the development of the novel that he is often cited as the first true English novelist. He is also regarded as a founding father of modern journalism and one of the earliest travel writers. Daniel Defoe died in 1731.