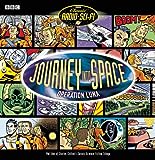 Charles Chilton’s classic radio sci-fi series Journey into Space thrilled listeners between 1953 and 1958, attracting almost eight million people to its gripping tale of the far future and the thrills of interstellar travel – the last radio programme in the UK to attract a bigger evening audience than television. The original first series, Journey to the Moon, was lost, but thirteen episodes were re-recorded in 1958 under the title Operation Luna, starring Andrew Faulds as Jet Morgan, Alfie Bass as Lemmy, Guy Kingsley Poynter as Doc, David Williams as Mitch and also featuring David Jacobs. All thirteen are included here, as well as the sole surviving extract from Journey to the Moon and a special half-hour documentary Journey into Space... Again, featuring clips from the series and interviews with Charles Chilton and members of the cast. Also included on the CD version is a PDF file of a comprehensive 16-page booklet detailing the history of the series, with cast lists and episode guides. So prepare to blast off for the Moon and experience a voyage of danger and excitement in the company of Captain Jet Morgan and his crew...

Charles Chilton was born in London in 1917. He was raised by his grandmother after his father was killed in the First World War and his mother died in the 1918 flu epidemic. He started work aged fourteen, for a company that made electrical signs, but left in 1932 and got a job in the BBC record library. From here, he worked his way up to becoming a full-time producer. After a few years presenting music programmes, Chilton joined the RAF when World War Two broke out, and was sent to Sri Lanka to run the forces' radio station. On his return, he produced some of Alistair Cooke's first broadcasts from America. Chilton himself then spent some time in the United States, writing and producing several series of American Western history. The most successful was Riders of the Range, which was first broadcast on the BBC Light Programme in 1949 and ran for six series. It was replaced by the show that would bring Chilton international recognition: Journey Into Space. The serial was commissioned by Head of Variety Michael Channing, and was initially planned to be twelve episodes. It ran for three series, was translated into 17 languages and attracted huge audiences: at one point, almost 8 million people were tuning in. Chilton was to go on to produce many more hit shows, including The Goon Show and Oh! What a Lovely War, which was adapted first as a stage musical and later as a film directed by Richard Attenborough. In 1976, Charles Chilton was presented with an MBE, and the following year he retired from the BBC. He died in 2013.