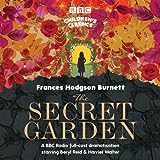 More About This Title The Secret Garden

When spoilt young orphan Mary Lennox is brought back from India to live in her uncle’s house on the Yorkshire Moors, she finds the blunt ways of the staff at Misselthwaite Manor an unpleasant shock. Bored and miserable, it seems as though life in England will be awful. But Misselthwaite has hidden delights and, when Mary begins to discover them, nothing is the same again. First, there is the secret garden – and with it comes a boy who knows all the wonders of the country. He can even talk to the birds! Then, as the old house gives up its biggest secret, Mary forms a magical friendship. Frances Hodgson Burnett's charming story is played out with all the freshness and warmth of the original novel in this BBC Radio full-cast dramatization.

Frances Hodgson Burnett was born in 1849.In 1865, her mother accepted an invitation for the family to emigrate to the United States to join her brother who owned a grocery store in Knoxville, Tennessee. Here, Frances tried to earn money by writing for American magazines to supplement the family's meager income. In 1870, her mother died and Frances was left at the age of 20 to support her family. She wrote furiously and, over the next few years, prestigious magazines, including Scribner's, accepted her stories and commissioned her to write more. In 1886, as a result of writing to entertain her two young sons, Little Lord Fauntleroy was published in book form and received critical acclaim on both sides of the Atlantic. Its success encouraged her to write again for children and Sara Crewe, later dramatized and rewritten as A Little Princess, and Two Little Pilgrims' Progress were equally well-received. Between 1906 and 1909 she wrote a number of children's books, several of which had been stories narrated to her boys. In 1911 she published her most enduring work, The Secret Garden. Frances Hodgson Burnett died in 1924, having written more than 40 books for adults and children.