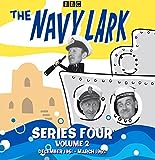 More About This Title The Navy Lark Collection: Series 4, Volume 2

The Navy Lark, one of radio's longest running laughter-makers, kept the nation on the crest of a comic wave from 1959 to 1977. All at sea in the Senior Service were conniving Petty Officer Jon Pertwee, silly-ass Sub-Lieutenant Leslie Phillips and the constantly bemused Stephen Murray as 'Number One'. Below decks Ronnie Barker was just about working his passage as (Un) Able Seaman 'Fatso' Johnson. This collection includes eleven episodes from the fourth series, the majority previously unreleased. The episodes are: ‘Captain Povey's Shop’; ‘Leading Seaman Goldstein's Party’; ‘The Invitation’; ‘A Strange Hobby’;’ Mr. Philips Gets Engaged’; ‘The Sinking of the Bubble Car’; ‘Long John Pertwee’; ‘The Admiral's Accident Report’; ‘Over the Sea to Rosyth’; ‘The Return of Sir Fredrick Flatley’ and ‘The Ship's Concert’. The box set also contains 'Calling the Antarctic' – an Overseas Service Broadcast from December 1962 - plus an illustrated booklet with detailed programme notes, cast biographies and details of the missing episodes.

The Navy Lark is the second longest-running comedy in British radio history (the topical Friday night show, Week Ending, which ran from 1970 to 1998, is currently the longest). In 1958, writer Laurie Wyman announced that he wanted to build a series around talented comic actor Jon Pertwee. Having secured Pertwee as the lead, he looked for other main characters and is quoted in the Radio Times as saying 'I felt we needed an idiot, and there was no one better at playing idiots than Leslie Phillips - so we got him.' The first episode of the series went out on 29 March 1959 and, from the start, the light-hearted and affectionate spoof on the Senior Service won many fans - some of the highest order! On the occasion of the show's 21st anniversary, for example, the crew was asked by WRNS to put on a special performance. They duly obliged, and in the audience that night at the Royal Festival Hall was Her Royal Highness the Queen Mother. Sir Charles Lambe, who was the first Sea Lord at the time, had also visited the studio during rehearsal. The crew of HMS Troutbridge was a motley bunch: Jon Pertwee, who actually served in the Navy during the Second World War, played the conniving Petty Officer and was established as a household favorite by the series. Leslie Phillips was the vague chinless wonder Sub-Lieutenant. His parrot cry of 'left hand down a bit' has passed into A Dictionary of Catch Phrases, whose author Eric Partridge writes 'within two years, it was a standard piece of Navalese'. The young Ronnie Barker (long before attaining fame as a television comedy actor) also appeared in the series, playing two parts: (Un) Able Seaman Fatso Johnson and Lieutenant-Commander Stanton. The Navy Lark gripped the nation for the best part of twenty years. Its signature tune, composed by Tommy Reilly and James Moody, was the jaunty Trade Wind Hornpipe and did much to contribute to the popularity of the series. The key to the show's popularity, though, was its irreverent but essentially gentle humor and, most of all, the many-voiced talents of its stars. As Leslie Phillips remarked in 1987, 'I caused more damage to Naval property than the Navy had done in two world wars'. The final episode was broadcast on 18 January 1976. However, the crew all jumped on board one last time for a Jubilee Special on 16 July 1977.