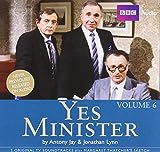 More About This Title Yes Minister

Paul Eddington, Nigel Hawthorne, and Derek Fowlds star in more machinations and manipulation, including two bonus sketches, which have never been released before. In "The Middle-Class Rip-Off," Jim Hacker’s local constituents need financial help for their soccer team and turn to the Minister for support. However, Sir Humphrey is aghast at the idea. . . "Party Games" is the double-length Christmas special, where the Prime Minister announces his resignation and Jim Hacker runs for party leader—with the help of the Eurosausage. The two special bonus sketches are "The PM’s Plan," in which Margaret Thatcher famously stars as the Prime Minister in the sketch she co-wrote with Bernard Ingham; and "The Funny Side of Christmas," a Christmas sketch presented by Frank Muir.